How to Learn and Develop Communication? Giving Feedback 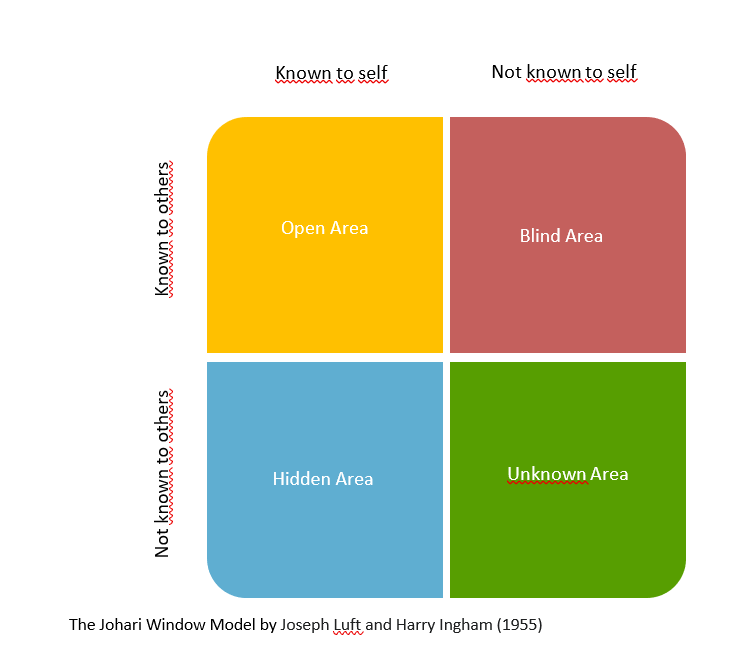 The Open Area includes everything that I consciously communicate to others. For example: The teacher tells the students that the seminar has to end 10 minutes earlier today.

The Hidden Area, on the other hand, includes information that I am aware of but do not share with others. This information often concerns our private person. For example: The teacher does not tell the group that the reason is that his child is sick and needs to be picked up earlier from daycare.

Everything that is known about us to others but not to ourselves is in the Blind Area. In our example, this includes the fact that the teacher speaks faster than usual and keeps tugging at his beard. These are also communicated signs that are perceived by the group - the teacher, however, is completely unaware of them.

The Unknown Area, includes everything that neither I nor the others are aware of. This might sound a little mystical as it could be anything: Reasons for certain behaviours that even we are not aware of, include for example the fact that they go far back into our childhood or because they are repressed. However, this area plays a less important role in communication training. This area is usually dealt with in the context of psychological counselling.

Rhetorical education primarily addresses the two upper quadrants: the Open and the Blind Area. The goal is to make the Open Area as large as possible through self-observation and reflection - by making the blind spot smaller and smaller and becoming aware of unconscious behaviours:

The basic method for this development is feedback. By receiving feedback, one gets insight into (communicative) behaviours that were previously hidden in the blind spot.

Since everyone has his or her own perception of reality, I cannot rely on what I want to say is actually reaching my counterpart in the intended way. Feedback can help to overcome this uncertainty and contributes greatly to the further development of communicative and social competence.

2.1. Observe yourself in everyday life 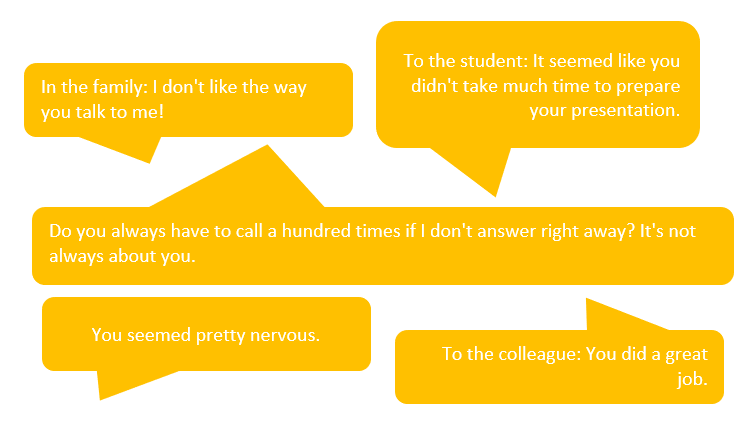 2.2 Which perception is the reason for the feedback? 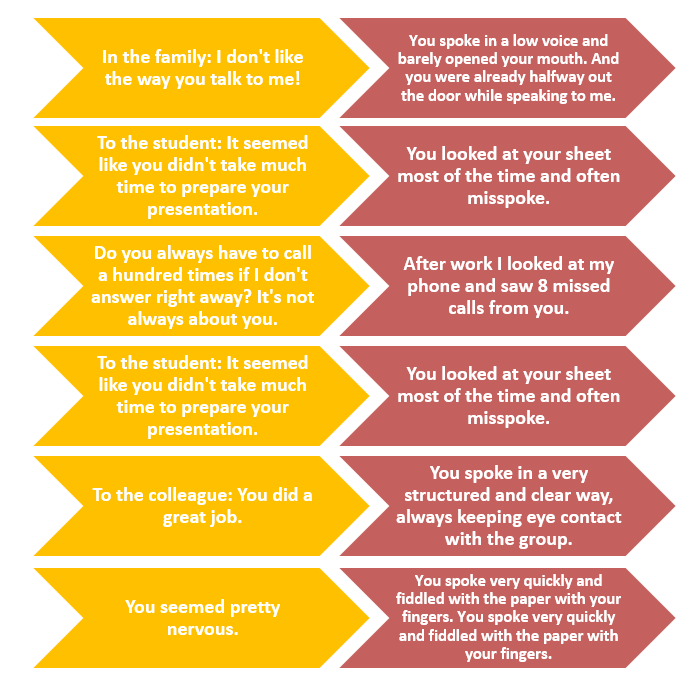 Think about what specific situation led to this feedback. Describe it as precisely as possible - only for yourself.

Didactic note: Consider whether the perception can be "photographed". This way you avoid descriptions that are already biased by your opinion or interpretative (e.g. you smiled all the time as if something was unpleasant for you).

2.3. How did this perception affect you? 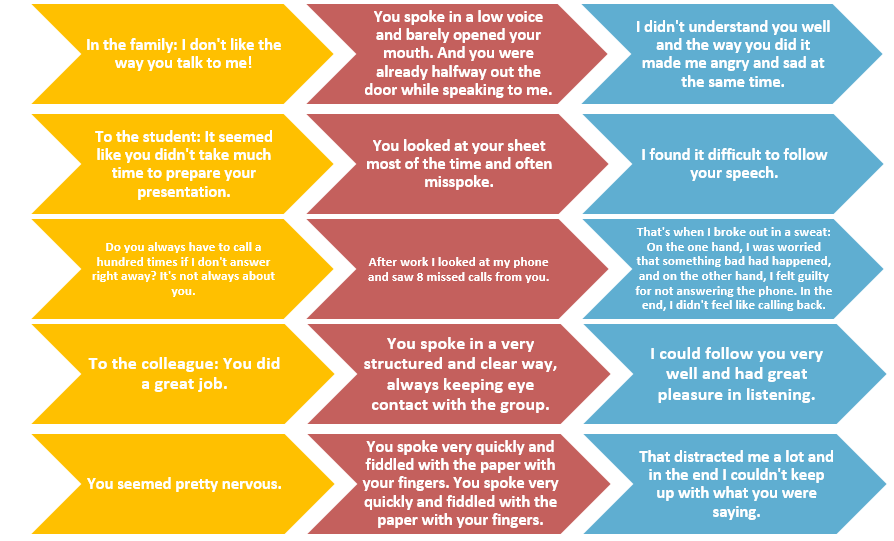 Try to really stay with yourself here and describe your feelings and inner reactions. Don't be surprised. This is not easy. You can be affected in different ways: excited, carried away, amazed, annoyed, confused, entertained, bored.

2.4. What role do my feelings play here?

Verbalising feelings is particularly important in private conflict situations. Often the feelings emphasise the relevance of the issue. See example 1 (“ I don't like the way you talk to me!”). Expressing the feelings can make it clear to the daughter that this is not just a matter of parenting or a power play. A parent is actually affected or hurt by my behaviour. This can be real a turning point in such moments.

The advantage of this kind of feedback is that everyone can take away what they need. Whether the feedback is valuable to the person or not is for them alone to decide. In example situation 1, it is possible that the daughter intended exactly this effect. The example shows that a distinction between positive and negative feedback does not work: What is negative for me as a listener may well be positive for the speaker. In example situation 4, the student may decide in retrospect that he was simply in a bad mood that day because he still had an exam to take. He may know that on any other day he would have spoken much more slowly and not give much importance to the feedback.

Giving feedback aims at letting the recipient know exactly where he or she stands. He or she knows which specific behaviours have caused which effect - no matter whether positive or negative. He or she can decide to change something in the future or to do it again in exactly the same way. He or she is completely free in this decision.

2.7. Caution: Not everything that is called feedback is feedback!

In the university context, it is our job to evaluate. Exams, tests, assignments - in the end it is all about grades. Here it is particularly important to distinguish when it is really about feedback (about personal development) and when is it about a grade or credit points.

The fundamental difference is that feedback by its very nature is subjective and grades should be objective. Emotions or our personal opinion should not play a role here.

Both are difficult to combine in one process, as for the students the final grade will always dominate everything said. For example, if a presentation has to be graded, feedback can only be an add-on. If you want to introduce feedback in a graded presentation, it should be made transparent in advance what exactly will be assessed (What criteria and standards will be used?) If the group also gives feedback, this should not be included in the grade. Announce this in advance, because the pre-assumption can change the whole feedback of the group: either to a particularly harsh or a particularly gentle feedback - either way it is of no use to the recipient and can even do harm.

Export
Back to top